Slovakia online 2015 is a new, one-of-a-kind study in the international measuring MML NET. The company MEDIAN SK probes Into the digital life of more than 3 million citizens of Slovakia. The study is a unique blend of the most extensive media, consumer and lifestyle tracking MML-TGI with a one-of-a-kind survey targeting the behaviour of Internet users.

The Internet is, without doubt, a medium which is changing old habits, significantly influencing the lifestyle of the whole population, bringing new opportunities, new challenges and new issues.

The medium is currently changing from being solely technological to being much more commercial.

The Internet is a symbol of nowness. Either you are online or not. Over the course of the last 10 years, the number of members of the online community in the Slovak republic has doubled, the number now being more than 3.1 million people (penetration of Slovakia is 70%).

The daily average time spent online is close to 3 hours and currently the number of men and women is equal, with all generations represented. Age groups under 60 correspond with their presence in percentages in the general population, or the numbers are even higher. The widely used devices to access to the Internet are desktop PCs and laptops. Laptops are currently the most used devices for Internet access and more than ten percent of the population use a mobile phone for access. The most frequently used browser today is Google Chrome. Internet Explorer falls behind Firefox Mozilla at third place.

The digital world is constantly influencing our lives. Internet users generally follow more media than non-users, on the other hand spending much less time going through individual media types. In the last 6 years, the Internet has had the most dire ramifications on printed media due to the significant decline in printed media readership. Together with e-mail communication, online presence on social media is the most widespread activity on the Internet. The Internet has brought not only social contacts, but also the option of fast shopping. Today, 63% people claim that when deciding about purchasing a product, the Internet helps them more than TV. Slovakians make use of the online world in areas outside of work – namely for entertainment, but also for minor activites and options which make numerous everyday activities in today’s world much easier.

Sample of segmentation of the online population according to attitudes and behaviours on the Internet: 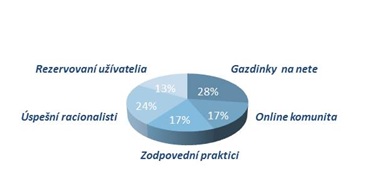